skip to main | skip to sidebar

still here
Posted by Harry at 12:18 PM No comments:

Memphis Iaido still exists. The schedule has been sporadic lately due to Sensei Dach's wife having had 4 strokes. Her health is now good. Sensei Dach has also developed lower back problems limiting a lot of up and down from the floor techniques.
Posted by Harry at 1:02 PM 1 comment:

The Memphis Iaido club continues to train in Iaido trying to keep the art pure. It seems hard to do when the Federation comes up with statements such as .....Now this is what is new this year.....

When training with my Sensei in Japan, Nagagaki Sensei of Shin Minato Iwakuni, he told me something that I pass on to all my students. That is...NEVER PISS ON A SAMARAI'S GRAVE.... This has a strong meaning... So many Samarai's died perfecting there techniques in battle. Today we do not use swords in battle. What right do we have changing the techniques handed down to us when we do not test them in battle?

In todays world of corrupt governments and psycopaths, the problems are found ,even, in small federations. Favoritism, who you know and ego's determine promotions in todays society.

Power, money and control dictate.... the way. This is totally repulsive.

The problem with our country (SHEEPLE) seems to be the same problem with the federation. I feel sorry for those that follow us. We the sheeple are allowing so much to be lost. We the sheeple are destroying the fabric of what life really is. We feed into the lies, control and manipulative ways. We continue to give them what they want, money and our time. We believe the lies and discard the truths.

The Memphis Iaido Club has changed the training program slightly. The senior Instructor, Harry Dach, has given more responsibility to the Junior (senior) students.

Training is not just on the physical level of swinging, moving and cutting. We do explain the techniques and sometimes go into the esoteric realm.

So ends this brief entry.
Posted by Harry at 11:51 AM No comments:

The Memphis Iaido club is doing well. We had Kato Sensei do a wonderful seminar for us. The club has grown since last posting. At times, twenty students can be seen practicing at the Bartlett Community Center in Memphis, Tennessee.

Kono Sensei honored us with his presence a few weeks ago. I did promise Murakami
Sensei, Kono Sensei and Kato Sensei that I would direct the Memphis Kendo Club to be more in line with the Federation (under Protest).

When I first trained in Japan, Seitei Iai had only 7 forms. Years later when I returned, Seitei had 10 forms. Now there are 12 forms . The biggest change's were with number 6 and 7. A slight change can be seen with number 4 and 5.

Some of the cuts have changed as far as the stopping points. I did alter my methods to coincide more with the federation. This is important as far as getting my students promoted. I will still make sure that my students are aware of the true old way that I was taught by Nagagaki Sensei (3 time all Japan national champion), Kamimoto Sensei (now deceased) and Tomihara Sensei (now deceased). I will never forget what my Sensei told me. He said,"never piss on a Samarai's grave". What he meant was that it took centuries and many a dead Samarai to ensure that a certain technique worked. How can we justify changing the techniques today when we are not out fighting with swords in life and death situations. We cannot test changes in techniques that have already been proven.

I cannot give these three great Senseis enough thanks. That is the one reason I have found it so hard to change. I also give thanks to my students who have shown enough interest to insist I keep on teaching.

My name is Harry Dach
Posted by Harry at 5:12 PM No comments:

Practice for the Memphis Kendo Club will be uninterrupted by the holidays.
Posted by Admin at 2:25 PM No comments:

The Club's Christmas get-together is scheduled for Sunday, December 16th.

This is a very informal get-together. More than anything, it's just an opportunity for the club to get together socially and have something to eat. Folks can stay as long as they like, but in the past, they typically leave shortly after the dinner is over.
I'm guessing that if we have a good size group, it will take at least 2 hours to get through dinner ----- everyone knows how long it takes to get a sushi order filled.

PLEASE CALL OR EMAIL me AS SOON AS POSSIBLE so that I can get a head count and call the restaurant in advance. 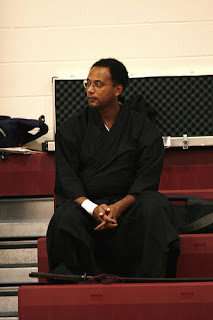 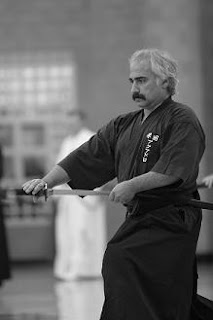 John Aquadro (pictured right) is also to be commended for making a go of it, despite some rough treatment at the outset.


This year's Iaido Camp was hosted on July 26th - 29th by the Omaha Kendo & Iaido Kyokai in Omaha Nebraska.
The camp was visited by two sensei from the Zen Nihon Kendo Renmei (All Japan Kendo Federation):

And was attended by the following instructors from the AUSKF:

And a visitor from the Budokan Academy of the Western Australia Kendo Renmei:

The results of the camp taikai are as follows:

Mudansha Division (1 kyu and below)


Nakanishi Hai (3 dan and above)


John Prough of the Japanese Swordsmanship Society and the EUSKF will be organizing the 2008 Iaido Camp, scheduled for June 5th - 8th at the campus of Bryn Mawr College near Philadelphia, Pennsylvania. Details will follow as they become available.

Pictures used above are the sole property of Dennis Ralutin.
Posted by Admin at 4:00 PM No comments:

MEMPHIS IAIDO CLUB
The Memphis Iaido Club was started by Harry Dach, a retired USMC Gunny. Harry Dach trained in Japan for many years and upon retiring went back in 1991 to travel across Japan by foot and hitch hiking. The trip took 6 months to finish. He had many memorable experiences such as sleeping under a spider infested unoccupied house during a rainstorm, a scary meeting with a wild boar in a bamboo forest and waking up at a truck stop with more than 3000 yen on his chest. With all that said..he owes his experiences and gratitute to his Iaido Sensei..Nakagaki Sensei of Shin Minato Iwakuni and his Kendo Sensei ..Nakahama Sensei of Iwakuni City.
Nakagaki Sensei was the all Japan Grand national Champion three times. Harry Dach and Nakagaki Sensei would spend hours , before and after training, talking about techniques and history. Harry Dach remembers Nakagaki Senseis ability to throw thumb tacs into the ceiling and walls a great distances sticking them perfectly nearly every time.
Harry Dach had the opportunity to train with and visit the house of KamiMoto Sensei of Yamaguchi City on numerous occasions. Harry Dach also went to many kashuku (seminars) while in Japan and trained with and got to know some of the greats as Tomi Hara Sensei and Kunida Sensei who took special attention to Harry Dach.
At first Harry Dach thought that his not being Japanese would be a hindrance in his study of Iaido. As time progressed and years went by Harry Dach felt no prejudice against him by any of the Senseis. As a matter of fact, at times Harry Dach felt that too much attention was given to him and less to the Japanese students.
Harry Dach competed in Many tournaments in Japan and did well winning first in some and third or better in others.
To continue his training and help those with a true interest in Iaido, Harry Dach started teaching to others in Memphis. His first two students were Patrick Register and Chris Aday. Chris Aday passed away with cancer but trained till his dying day.
Harry Dach was always treated with the respect and dignity deserving of an Iaido Practioner in Japan. Not so with the US Federation. Harry Dach respects his students highly and will defend there needs as a Gunny in the Marine Corps. He has never taken one penny for his training of others in the past 15 or so years. He states that if it was not for the students POSSIBILITY of getting rank, he would not join the US federation where it seems to be just donating money and nothing in return.
Harry Dach is a Go Dan promoted in Yamaguchi City Japan in August of 1991 in Iaido and a Yon Dan promoted in Yamaguchi City of 1986 in Kendo. He also teaches Judo and other forms of combative sword and unarmed defence. He trained judo with the Japanese Police department in Sasebo Japan in the early 70’s.
Posted by Harry at 12:10 PM No comments: 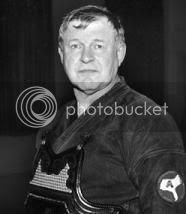